Today Microsoft released a preview of their new service RemoteIE. This service is a way to remote test Internet Explorer on different devices like Windows, iOS, Android and Mac. RemoteIE is built on Azure Remote App.

After downloading the RDP client from the Mac App Store I signed on with my Microsoft Id. An invitation was presented and I accepted and started a new session. Basically this is a remote session using a Microsoft RDP client connection to a virtual machine running Windows Server 2012 R2 on Azure.

The logon took some time before an Internet Explorer window became visible.

The performance was quite good for casual web surfing. It’s even possible to use RemoteIE for playing Youtube videos with acceptable frame rate and with good sound.

Main usage for this service is probably going to be for developers and testers testing future versions of IE without having the latest bits installed locally. This is great for Mac or Linux users who would like to test against IE.

There is a drawback, sessions idle after 10 minutes and can only last for 60 minutes.

Read about RemoteIE on Techcrunch.

Here are some random links to articles and other stuff I stumbled on the past week:

A great tutorial a’la “Hello world” in building a little jQuery call to a PHP json backend. Simple but well done. Just copy/paste and it works.

Here are some random links to articles and other stuff I stumbled on the past week:

Öredev videos is out in the open. Lots of interesting seminars to watch.

Install Node.js on your Raspberry Pi.

There are a lot of frameworks for Node.js this site list some of them.

Gist is a pastebin service provided by GitHub. A handy little tool for storing, viewing, sharing and forking snippets of code. Below is my first Gist. A small example of T-SQL code.

Sharing this Gist on my self hosted WordPress required a plugin. I picked the Github tool for WordPress.

Its possible to use FTP to access diagnostics logs in Windows Azure websites.

When using FTP to access your Azure website, it’s important that the provided credentials is in the right format. The format you should supply is like this: site_name\your_username. Only user and password won’t work.

My installation of Visual Studio 2012, VS2012 lost the squiggly and red underline feature.

Here is the small quest to get them back.

3. Select checkboxes for Underline errors in the editior and Show live semantic errors. 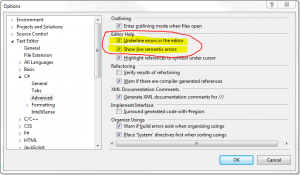 I have for sometime been looking for a code highlighter to publish snippets of code.

Have high hope for the Crayon Syntax Highlighter.

The installation was done from within my WordPress installation. More details are found here.

Here is a small code snippet in JavaScript, I cut and pasted it into the Crayon Tag Editor.

This is a short, how to install TypeScript with Visual Studio 2012. In this example I’ve used the Professional edition.

1. Install the TypeScript plugin for Visual Studio 2012. Download the .msi file from TypeScriptlang.org or go direct to Microsofts page.

2. TypeScript code are compiled to plain JavaScript with the TSC.exe compiler. We wan’t do have this process done automatic. A nice plugin for Visual Studio 2012 is the Web Essentials 2012 who makes the compilation every time a TypeScript file is saved.

3. In Visual Studio, go to Tools -> Extensions and Updates. Select Web Essentials 2012 and download. You probably have to restart Visual Studio.

4. Start to explore and develop with TypeScript.

Problem: When using Eclipse Juno I got this messagebox “Workspace at ” ” in use or cannot be created, chose a different one.

Solution: The solution is to delete the lock file in the workspace. If there is a process holding the file, kill javaw.exe. first.

Recently I have started to learn and discover how to develop for the new Windows 8 operating system from Microsoft. I have this as my evening and weekend project. The goal is to be comfortable with the tools and methods which Windows 8 Store Apps are developed.

At first I thought it was a bit cool to do client development in JavaScript(JS) but I think I have changed my mind. After some tutorials in JS i thought XAML and C# is better for me. I have been working on Silverlight projects before and C# XAML for Windows 8 are’nt that different on a conceptual level.

I must say, using Windows 8 is mixed feelings. Starting to use OS X was more easy on the mind then using Windows 8. Perhaps I’m a bit conservative. Windows has had a start button since the release of Windows 95. A funny thing is, I did’nt like it at the beginning because I was used to Windows 3.1.

A few early thoughts about Windows 8: